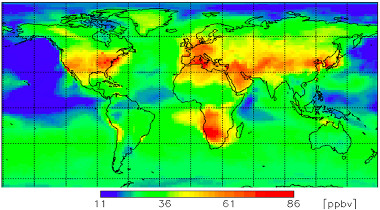 The last question is to look at the impact of a temperature variation on the Air Quality Index. For instance, let assume that an instrument is measuring an average of `120 mg/m3` of Ozone over 1 hour, which corresponds to an AQI of 50 (Medium) according to the European Common Air Quality Index (CAQI).

At 20°C and 1 atm, `120 mg/m^3` converts to 120/2.00, i.e. 60.0 ppmv. So let us assume that this is the actual measurement from the Ozone sensor. The question is then, what if the ambient temperature was peaking to 42°C, as it sometimes happen during summer heat waves, then what would be the correct mass? The convertion formula is:

The above explanations confirm our initial hypothesis that even though Ozone readings can be provided with different units (ppm and `mg/m^3`), this is actually not a problem since there is a standard way to convert readings from `mg/m^3 to ppm` and vice-versa. Moreover, the impact of using the reference STP (Standard Temperature & Pressure) instead of the actual ambient temperature and pressure is minimal, i.e. just units of Index in difference for the Ozone.