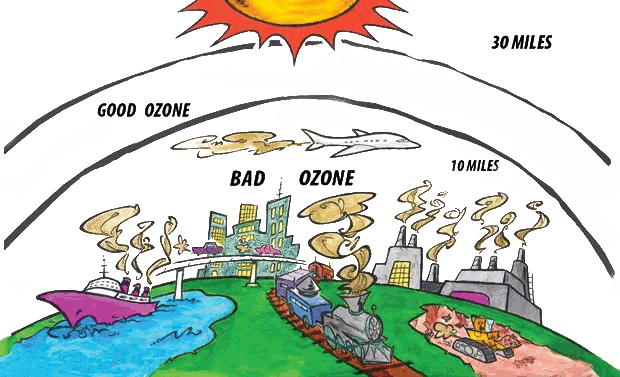 The calculation for the Ozone Index is now using the hourly reading, instead of the previous 8 hours average, but still applying the same 8 hours AQI breakpoints formula for AQI below 100. The previous procedure for calculating the 8-hour average concentrations is not used any more for Instant reporting. Above AQI 100, the normal 1 hour Ozone breakpoints are used (while before, the AQI above 100 was defined as the maximum of the 1 hour and 8 hours readings).


The US EPA EPA is proposing to strengthen the National Ambient Air Quality Standards (NAAQS) for ground-level ozone, based on extensive scientific evidence about ozone's effects (more information). This new standard (plotted in grey in the above graph) is only for 8 hours average breakpoints, and since it is not yet approved - it is not used for the "Ozone Instant Cast" breakpoints.
oOo

For those interested in understanding how this scale compares with the scale used by other countries, the first important point to pay attention to is that the the concentration unit used for the scales can vary: For the US EPA, the Ozone concentrations are expressed in ppm (particles per million) while for many other countries, including India and China, it is expressed in µg/m3;

Therefore, the first step for comparing the scales is to use a primary concentration unit. In this case, ppm is kept as the primary unit. The conversion from µg/m3; is somewhat straightforward and consists in multiplying the number of particles by the molecular mass of the ozone times the density of air.

The density of air is dependent on the ambient temperature and atmospheric pressure, but, in order to simplify, a common assumption of a 25 degrees Celsius ambient temperature and 1 atmospheric pressure is used. Under those conditions, the following formula is used for the conversion: The scales can now be compared on the same ppm scale, and the two graphs below shows the respective scales for 8 hour and 1 hour. So, once again, as it has been seen many times before, the scales used outside of US are actually much more safe than the one in US!