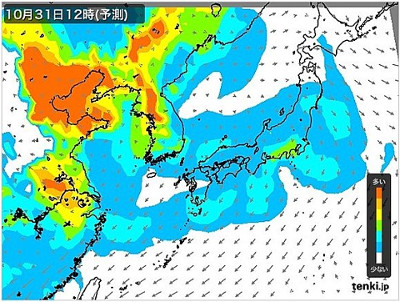 PM2.5 forecast from www.tenki.jp
The reason for upgrading from PM10 to PM2.5, explained by Dr Sarath Guttikunda in this explantion about PM10 vs PM2.5 is that there are now new studies presenting evidence that PM2.5 is more harmful than PM10. As Dr Dr Sarath Guttikunda sates in the article, “physically, this makes sense since smaller than particle have a higher probability to go deeper into the lungs and harm people”.

Many countries, like China have done tremendous efforts in modernizing their monitoring equipement to the PM2.5 standard. Howerver, there are still quite a lot of countries not yet providing PM2.5 data, but only PM10. And among those countries with only PM10 data, the most surprising one in South Korea (with the exception of Seoul).

It is surprising since the Air Quality in South Korea is very similar to it's neighboors countries, namely Japan and China - where PM2.5 AQI is quite often peaking above 200, while PM10 AQI is acceptable and below 100. From the picture on the right (taken from tenki.jp), which represent the PM2.5 data flux, there is no doubt that South Korea is suffering from the same PM2.5 high densities as China and Japan.
Note: This article was written in 2014. Since then, all stations in South Korea provide PM2.5 data.

So, the question that we would like to answer is: Can we deduct the PM2.5 AQI when only PM10 data readings are avaialble? The answer is yes, and the main reason is that there is a very strong correlation between the PM10 and PM2.5 mass concentration. The South Korea governement has recently released, for few stations, both PM10 and PM2.5 hourly concentration data, and this will be the basis for this experiment. The graph below shows the last 30 days concentration for the station 경기 탄벌동 (gyeong-gi tanbeoldong) for both PM10 and PM2.5:

Note that the ordinate axis scale is different for PM10 and PM2.5, so although the graphs overlap, the values are actually different. From the correlation graph, there is just no doubt that there is a very strong linear correlation for the PM10 and PM2.5 concentration. The pearsons cooeficient for the last 30 days is . The resulting linear regression is defined with this formula:


Also, it is worth noticing that there are three periods where PM10 is significantly devaiting from PM2.5, two between October 27th and November 3rd, and one arround November 18th. This usually occurs during sand storms.

So, all we need to convert the PM10 AQI into the PM2.5 AQI, is to stretch the mass scale from PM10 to PM2.5 to determince the corresponding PM2.5 mass value from the PM10 reading, and finally use the PM2.5 AQI scale to deduct the final AQI.

The graph on the right shows the mass to AQI convertion formula. The absissa (x axis) is the mass (in milligrams) and the ordinate (y axis) is the AQI. The two graphs correspond to the PM10 and PM2.5 deducted from PM10 readings. Note that it empirically confirms the hypothesis that PM2.5 AQI is always higher than PM10 when the PM10 mass is not too hight (in this case, lower than 480 milligrams).

From the two maps below, the one titled "Interpolated PM2.5 AQI" is using the above formula to show what the "actual" Air Quality could be, if PM2.5 stations would be used. The result is indeed quite scarying, but on the other hand, that's not a surprise: The PM2.5 AQI is much more strict than the PM10 AQI, as explained in the begiging of this article (see explantion about PM10 vs PM2.5).

Before concluding, there are few very important points to mention:

As a conclusion, provided you take all the precautions related to the 3 remarks above, you could use the following convertion table to calculate the actual AQI:
...


Note that the data provided is this article follows the Korea Open Government License (kogl.or.kr)